The Real Spatial Planner of Sydney 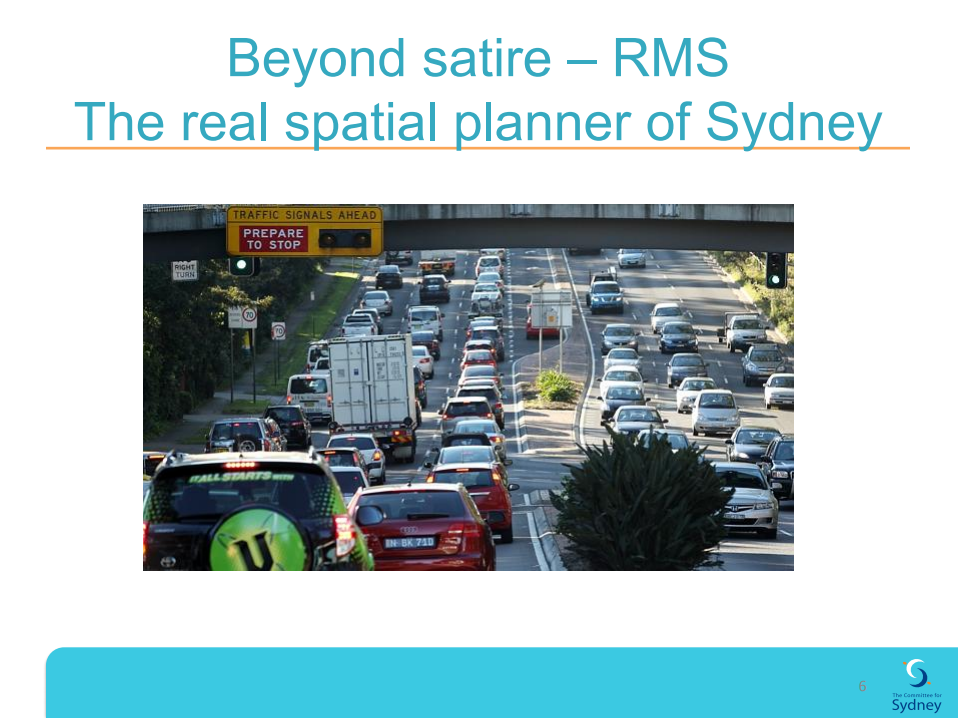 On the 30th of April 2015, Dr Tim Williams, Chief Executive of the Committee for Sydney gave a presentation at the University of Sydney in which he lambasted the WestConnex motorway project being pursued under Premier Mike Baird and advocated fiercely for a more ambitious public transport agenda in order to reduce car dependency. Despite his sensible remarks being entirely in agreement with intelligent urban planners around the world, within a week he was pressured to apologise by Lucy Turnbull, Chair of the Committee for Sydney.

A letter 'clarifying' Dr Williams talk was published in the Sydney Morning Herald on 4th of May 2015, as follows:

The Committee for Sydney has been a strong supporter of the state government's unprecedented level of investment in public transport, roads and other key infrastructure essential to managing Sydney's future growth ("WestConnex may spur better project", May 4). We recognise the greatest share of this investment is in improving the rail transport system.

The Committee for Sydney board and chief executive would like to clarify that Tim William's talk on April 30 expressed his personal opinion. We have long supported the principle of a well-integrated WestConnex project which combines improved travel times and reduced congestion, and enables the creation of more housing and urban renewal along Parramatta Road.

Such transformational projects are vital to Sydney and the challenges of cross-government co-ordination, communication and leadership required to realise them should not be underestimated.

Later that year, Premier Baird rewarded Turnbull by appointing her as the Chief Commissioner of the newly formed Greater Sydney Commission, charged with overseeing planning and development across Sydney. In 2016, she came under fire for being completely ignorant of WestConnex's destruction of heritage homes in Haberfield, Australia's first successful planned 'model suburb'.

As of 2020, the WestConnex motorway construction continues apace despite widespread opposition and even described by transport expert Dr Chris Standen as 'the biggest waste of public funds for corporate gain in Australian history'. Sydney's inadequate rail transport system continues to be plagued by serious failures and overcrowding. This shameful episode in Sydney's planning history should never be forgotten.